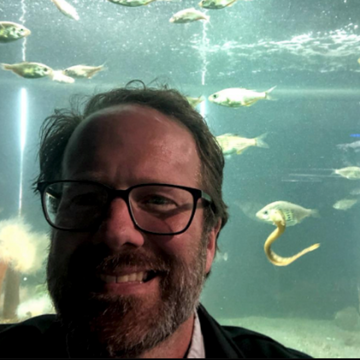 Rus Higley will be helping out Louise Huffman and Bill Grosser this year.  Rus is a School of Ice (SOI ) grad twice, both in a face to face several years ago and last year virtually.  As a faculty member at Highline College, near Seattle, he teaches marine biology and oceanography and has used some of the SOI modules in his classes and hopes to eventually create an entire SOI class someday.  His students are most commonly non-science majors and so this is likely their only taste of polar science.  Besides teaching, Rus is also the Director of Highline College’s MaST Center, a community-sized public aquarium which is home to over 250 species of marine life from the Puget Sound.  For fun, besides SCUBA diving, Rus is also an avid river rafting guide and will be going down the Grand Canyon next summer for the 4th time.